What Hands Win in Texas Hold’em

The aim of playing Texas Hold’em (and playing poker in general) is comparing your hand with your opponents’ and checking out who has the winning poker hand. This sounds fairly simple and straightforward, and it is once you get a hold of it and fully learn how poker hand rankings work. Once you become a bit more advanced Texas Hold’em poker player, everything seems logical and naturally slots into place. But admittedly, it is tough at first.

A lot of newcomers to poker games go headfirst when their hole cards read pocket pairs, thinking they’re bound to win. However, as you’ve probably experienced already, it’s not always the case. To play the game efficiently, you need to always think about what other players might be holding and what the odds of their holding a stronger hand are. At first, you can use an online poker odds calculator to figure out what your chances are given the cards at your disposal. Some purists consider this a form of cheating. But you know, the English army believed using crossbows instead of longbows was cheating, and no-one asks for the loser’s opinion.

To understand which hands win, we need to go through overall hand rankings first.

There are ten different hands you can have in a game of Texas Hold’em, and we’ll list them out now, starting with the weakest one:

Let’s explain each one.

High Card — This one is the weakest as it isn’t really a hand. This happens when you can’t pair any cards with one another, and you go into the showdown with a card of the highest value. When this happens, your best move is to fold, unless you’re a bluffing genius, in which case, fair play to you! An unsuited hand of Q-9-8-4-2 is a Queen-high.

Pair — This one’s pretty straightforward. It might come as a shock to you, but a Pair represents a pair of two cards of the same value. Although it’s low on the list (taking the second-worst spot), oftentimes, it usually ends up being the winning hand in Texas. Example: 7-7;

Two Pairs — All knowledge starts with curiosity. The one that sticks around the longest is the one you acquire by figuring it out on your own. Consequently, we’ll just give you an example of a Two Pair, and we’ll leave you to it and what it might be: J-J-6-6;

Three of a Kind — In life, you should seek out that special someone who’s simply one of a kind. Unless, of course, you’re playing poker. Then, strive for more of the same. Three of a Kind is plainly three cards that come with the same value. Example: 4-4-4; 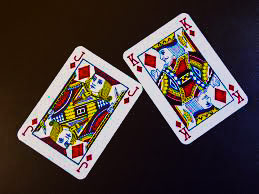 Straight — Before you jump on your progressive horse and ride into the pub guns ablazing, there’s a reason behind the name. This is the first hand along the way for which you need the full five-card set. Straight is a hand of five cards, all of which increment in value by one, as if they’re forming a straight line. Example: Q-J-10-9-8;

Flush — This is a simple hand. You don’t have to worry at all about the value of the cards; you’re only looking for their suit. Flush is any five cards of the same suit. Example: A-J-7-5-2, all of hearts.

Full House — This one is a mix of two aforementioned hands. What do you get when you cross a Three of a Kind with a Pair? A Full House! And we’re not talking about that Bob Saget show. Example: 7-7-7-3-3;

Four of a Kind — What’s stronger than an elephant? Yep, two elephants! Apply the same logic and ask yourself what’s better than a Three of a Kind. You’ve got it! Example: 8-8-8-8;

Straight Flush — Another mixture of two other hands. As the name suggests, it represents a Straight, with all cards used being of the same suit. Example: J-10-9-8-7, all of clubs.

At all times, you must be aware of the fact that poker consists of five-card hands. Even if you have a Pair (which is two cards), your hand will still contain five cards. This signifies that the other three slots are filled up with the highest-value cards available. For instance, if you have A-9 as your hole cards, and the community cards read A-J-8-5-3, this will translate into your hand being a Pair — A-A-J-9-8. This “five-card” rule is something many newcomers neglect and will often be a cause of frustration because starters believe their pocket pair will be stronger than a pair from the board.

Why is this important? Well, this helps determine who wins the pot when players have a hand of the same ranking. Let’s say that, in the instance above, there’s another player holding A-4. Both of you have a pair of Aces, with their hand being A-A-J-8-5. That’s when the “kicker”… well, kicks in. The kicker is the highest-value card outside of the one that forms a hand ranking. In plain English, that’s the best card you have without the matching Ace pair. Your kicker is a Jack, which you both have, and it doesn’t break the tie, so you go one step further down the line. Your next kicker is a nine, while theirs is an eight. This signifies you win the pot.

There’s another rule you ought to know. This one states that no card outside of the five used to form the hand applies at the showdown. For instance, you can have on the board a set of these community cards: Q-Q-J-9-5. Two players going head-to-head can have hole cards of J-8 and J-3. Despite Player 1 having better hole cards, when you form the hand, they’ll both have Two Pairs of Q-Q-J-J-9, and they would split the pot.

When you work on your poker strategy, you must always take into consideration these added hand-forming rules, especially about the kicker. During each betting round, you need to regroup and figure out what your odds are and what possibilities there are for your opponent. For instance, before the River (last community card), you can have J-7-7-7, with your hole cards being J-10. This means you have a Full House with a ten as a kicker. However, if the River drops out another Seven, your opponent with an Ace (or a King or a Queen) will win the pot, even if they had nothing special before the last card. That’s why you shouldn’t always push all the way, but rather, wait and think about it every step of the way.

Now you know what’s everything you need to look out for when figuring out what hands will win in Texas Hold’em! You can use the odds calculator and have the hand rankings next to you when you start off, at least until your brain learns how to calculate the odds on its own. Good luck!